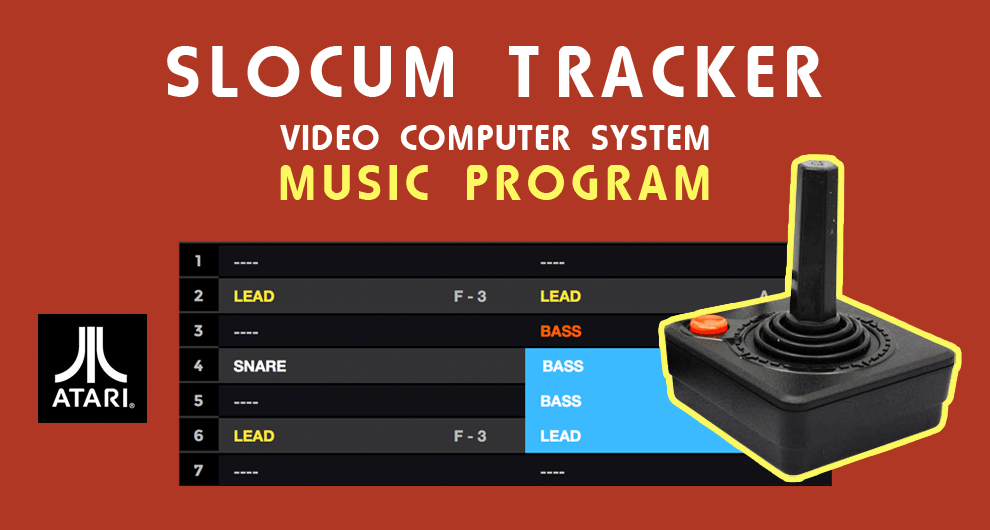 A tracker for a dead computer system

Slocum Tracker is a utility that enables people to write musical compositions for the Atari 2600 using a tracker-style interface, directly from their web browser.

The real star is Slocum's Sequencer Kit (where the application derives its name from), a music driver that is very efficient on the Atari 2600's CPU providing plenty of resources for doing other tasks while simultaneously playing music (such as render graphics and perform game logic).

Though Slocum's driver provides an elegant format for writing musical instructions, the fact that having to write binary code in assembly language to write music is quite... cumbersome, or at the very least slows down the creative juices.

A tool born from necessity

Slocum Tracker provides an abstraction layer via a tracker inferface, its output translates all written musical instructions into a header file, which in turn can be assembled into an Atari binary along with Paul Socum's Sequencer Kit.

These contents can be played on their own (on either an Atari emulator or on the real thing if you can deploy the program onto cartridges), or can be used as the soundtrack for homebrew games, as was the case for UT2600.

The goal being that homebrew game developers can call in help from less technically savvy (but more musically inclined!) people to write the soundtrack without having to school themselves in how to write software for old hardware.

Luxuries of the modern times

The application allows ease of editing using copying and pasting of (sub)patterns, provides an undo/redo history as well as the ability to store songs to be recalled at a later date.

So basically this is a 2016 application that allows you to write music using a tool made in 2003 for a computer released in 1977. Just because we can.

Consult the online help to see how you can turn your work into an executable Atari 2600 program.

For the Video Game Music course, students of music composition are challenged to overcome the limitations of early video game hardware and let their creativity shine by coming up with a composition for the Atari 2600 using Slocum Tracker as the tool of choice.

Slocum Tracker runs directly from your browser allowing the budding Atari composer to: